Brands like H&M and Uniqlo have become a staple to the Singaporean landscape, offering clothes with decent quality and fittings, but more importantly, at a low price.

To some it has been a god-send; our TSS content lead swears by $7 Uniqlo T-shirts.

But even Uniqlo might have stuck around long enough to see itself become a villain. Once a saviour to the Singaporean male, Uniqlo staples are today derided as too basic, and feature heavily on starter packs memes for the maligned Singaporean guy.

So, what can a fashionista on a budget do?

Stop for a second before you go, “Ew, someone’s old clothes?”. 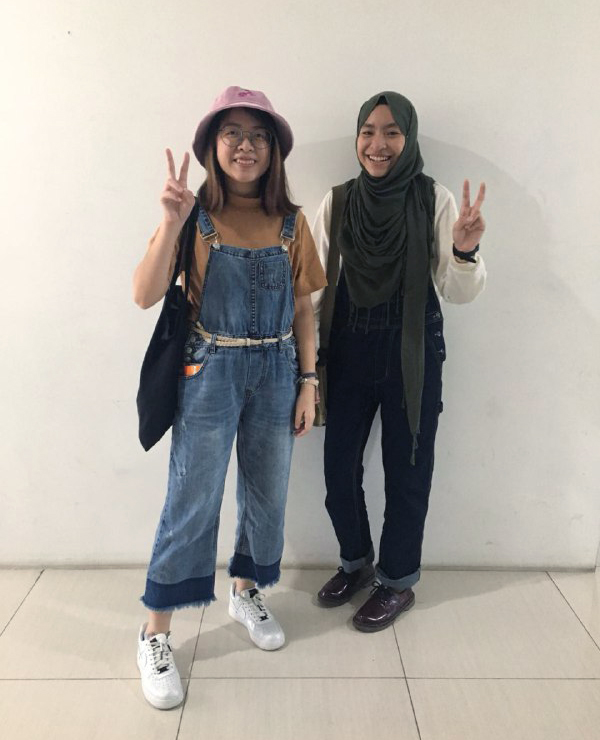 Instead, think about the massive amounts of social capital to gain. You’re not putting on hand-me-downs, but instead, putting on the badge of wokeness — signalling to others that you are environmentally-conscious by eschewing fast fashion!

To top it all off, you’ll be wrapped in vintage-chic (still a thing?) and retro styles (always a thing!).

But more importantly? It will come cheap.

In all seriousness, when my colleague introduced me to two of her friends, Josilyn and Nabilah, who are both 23-year-old avid thrift-shoppers, I knew I had to get introduced to check it out for myself up close.

I was curious at how good their finds could be, so I followed them on a stuffy Saturday afternoon to Lucky Plaza, where they said their usual haunts were located. Our first stop was a place called Fleawhere. For a world that was so alien to me, I was surprised to hear that it had been operating for a decade.

My two new friends took me inside, ignoring all the frills at the entrance like gadgets and other accessories, and instead headed straight for the back where a clothing market was hidden away.

There, we found many women operating makeshift booths, manning tables with piles and piles of clothing stacked on top of them like tiny hills. Lots of bargaining was going on despite the already low prices of their second-hand clothing. Some shirts and dresses went as low as $4 apiece — something you don’t see every day. There were also racks that sold everything for $5.

“Is it necessary to bargain at this point?” I asked. “Since everything here is cheaper than whatever is out there.”

“Not really,” Josilyn said, as she browsed through a rack of clothing. “Unless it’s going for over $10 apiece, then you might have to bargain to see if you can get a couple dollars off.”

Nabilah shared her best tips for bargaining: “Just be thick-skinned about it and try your luck. Although these prices are already cheap, there’s no harm in trying. But don’t be unreasonable about it. It won’t work.”

I began browsing through an adjacent rack. It was filled with old, vintage clothing that I didn’t think I’d be able to wear. “What’s a good price, generally?” I asked her.

“Below $10,” she replied, and picked out a really retro-looking, checkered dress. Like something out of the 80s. She turned to Nabilah. “Nice?”

“Yeah, that looks good on you,” her friend said approvingly.

To my surprise, plenty of women were swarming the tables and going from booth to booth to sift through the piles.

According to them both, the thrifting community in Singapore is a bit of a mixed bag. “I mostly see foreigners who are looking for cheaper alternatives. Sometimes I see students, or people like us who are looking for unique clothing,” Nabilah said. “But there are more thrift stores opening all over Singapore. I think there is a community, and it’s definitely growing.”

She also told me about a Facebook page (or group) for thrift shopping that regularly announces upcoming flea market events.

Josilyn gestured vaguely around us. “Usually there’ll be more tables set up, with more clothes.”

“And do you usually find good stuff here?”

“Sometimes,” she nodded, and put back the dress. “But there’s more at another store.”

We left Fleawhere empty-handed, the two of them were only just getting started.

Our next stop was a shop that called itself Lucky Plaza Bazaar, in equal disarray to Fleawhere.

There was a corner dedicated to denim clothing and jeans, a rack for jackets and discarded winter wear, and most notably, a tall rack filled with the kind of overalls you’d find in engineering school.

I began to notice that these stores seemed to only have vintage or dated clothing. So I turned to the two girls with a question: “Do you need to have a certain style to thrift shop effectively?”

“You need to like dressing vintage,” was the consensus. “Most of these clothes you can’t find in a place like Uniqlo.”

It seemed they were right. The only other people in the store with us were older ladies and a handful of aunties.

They came upon a bunch of denim overalls that looked good – and functional, with multiple pockets. My colleague picked one up and started looking at it, before Josyln and Nabilah began peppering her with comments about how well it suited her.

“There’s a lot of pockets in this,” Josyln said, meticulously checking for defects, which is mostly looking out for torn pockets, rips, or threads that are way too loose. “You should buy this!”

“Is that how you decide if an item is worth it? The pockets?” I asked, half-jokingly. But as it turned out, they did indeed pick their clothing based on its functionality as well as aesthetic.

“Yeah, and sometimes you can alter what you buy too,” Josilyn told me. “You can even patch them up, sew them a little.”

Thrifting as a Lifestyle

The two girls later told me that they had been thrift shopping for years, since they were in their first year of polytechnic, after discovering a mutual love for “vintage and unique clothing” and starting out at flea markets. And for years, they’ve been enjoying their savings – buying dresses and pants for as low as $5 per item. Josilyn took out her phone and showed me a photo of herself on Instagram, wearing a nice flowery dress for Chinese New Year, among other cool outfits and looks.

“This was probably the best thing I bought,” she said of the dress. “It cost me less than $10.”

Nabilah indicated the long-sleeved blouse she was wearing. “I bought this for $5, and it was originally selling at a higher price at Uniqlo.”

“What else makes thrift shopping enjoyable for you guys?” I asked.

“It’s cheap and affordable,” Nabilah said, “and we’re also passionate about saving the Earth. Giving clothes a second life is one way to do it. I think there’s a certain charm to it. And if you compare used clothing to brand new ones, I’d almost always pick the used ones.”

“So how often do you visit thrift stores?” I later asked, as Josilyn was trying to decide between three pairs of pants.

“About once every two months,” she replied. Nabilah, too, had a similar response. Both girls told me that they almost exclusively thrift shop nowadays, forgoing the more popular range of H&M, Zara, and Topshop.

In terms of money, every trip for them averaged at about $30 in expenditure, for around five pieces of clothing.

Extrapolating that to a year, they would only be spending $180 annually for 30 pieces of clothing.

Much less than similar trips to shopping malls for sure — where a pair of jeans would easily cost $60. It was at this time we came across our third stop, Refash — a store that sold only pre-loved clothing for as low as $5.90 apiece. Inside it was a rack of dresses — I even spotted a wedding dress.

Refash had less vintage clothing and more modern-looking styles, which could mean that even if you didn’t have a preference for retro styles, you could still find a good bargain out of thrift shopping if you looked hard enough.

Looking at the third store, another thought occurred to me: Won’t their wardrobes be too full if they went shopping every so often?

“Not really, because we give away our clothing or trade them when we don’t wear them anymore,” Josilyn said. “I think trading is really fun, you can get things of the same value without having to throw old clothes away.”

“Where do you trade?”

“It almost always happens at home. We invite friends over or go to their place to trade or swap clothing,” Nabilah said. “At flea markets, you either buy or sell. But swapping is free – and fun, too.”

As I bade farewell to them, I had to admire their approach towards refreshing their wardrobe — too often we’re used to discarding old clothes once they’ve got holes, or just neglecting old clothes for that newer, shinier jacket that’s caught our eye.

And even if these “old” looks aren’t for you or me,  I did see some winter jackets we would purchase for one-off cold-weather holidays going for as low as $10 — where they would usually go for around $100. Go figure. I guess Macklemore was onto something. 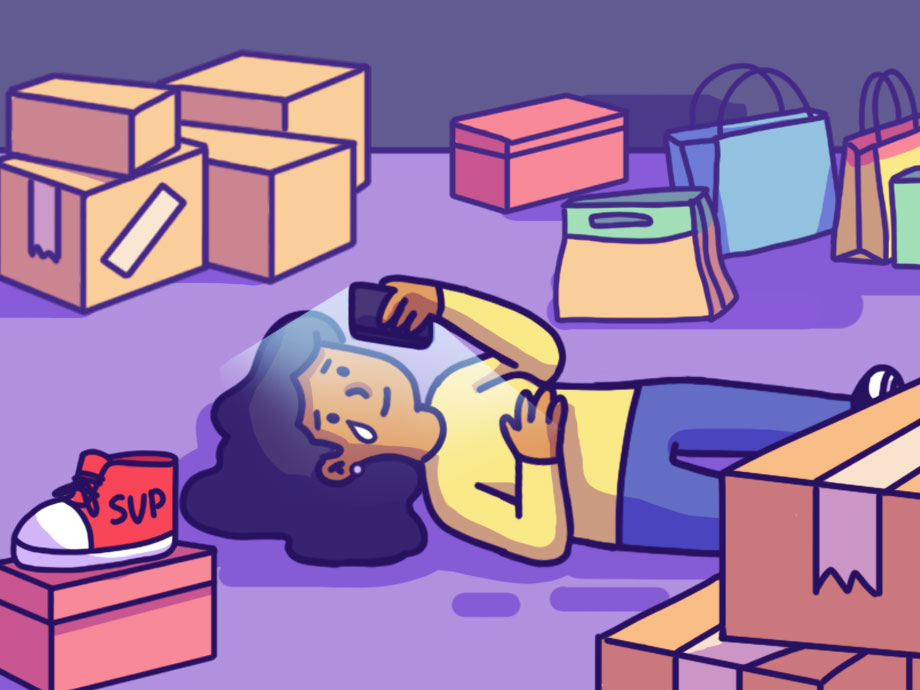 How to Finally Start Saving Money