J* (not his real name) is the kind of guy you’d paint as a conspiracy theorist, right off the bat.

During a casual lunch conversation he talks of shadow governments, Illuminati-esque people in power, and also about how the world financial system is a scam.

“How do you really know the bank has enough money notes for all of us?” he asks.

It’s hard to know how to react upon being confronted with such an alien worldview. I can only respond with a feeble question: “Then where do you keep your money?” His eyes glitter in response before he speaks.

Digging deeper, J recounts the moment in his life that his faith in the banking system came crashing down.

Prior to the global financial crisis in 2008, J was based in Japan. The day the markets nosedived, he recounted heading straight to the bank to withdraw all his cash.

He’d read far too much news on financial doom to feel safe with the banks again. Left and right, he saw reports of lives that were being ruined financially. He decided he wasn’t going to be one of them, so he retrieved what savings he had sitting in the bank.

“I was holding a huge stack of it, carrying it out,” he recounts. “My hands and legs were shaking. And I was so afraid, because that was a lot of money. I thought the whole bank was going to collapse. So I went to Citibank to withdraw it all.”

But if the banks weren’t safe, then was there a place safe enough to park cash?

“I think stocks are all rigged,” he says. “Companies make profit to buy their own stocks back. You know why? Because top officials get stock options — their salaries are related to stocks going up, but what happens when they decide to dump their stocks?

“This is what you call ‘pump and dump’ — but the legal version of it. When company insiders and managers sell stocks after an all-time high, prices will crash, and investors will lose their money. I don’t want to gamble on when that happens.”

He figured that gold would be a much safer bet — because it would be unmoved by the volatile markets… and unable to be taken from him once he purchased it.

Is your money even real?

We might think that banks can only loan out the amount it possesses in deposits and its vault. But that isn’t how banks actually work.

Putting it simply, it is possible for banks to loan out $2.50 in cash when it has only $1 in its coffers. This is based on the fractional reserve banking system that almost all banks in the world operate on (even Singaporean ones).

And that is the problem for J. “Money is all made up. Money can be generated out of thin air.”

There is truth to his words. In the worst-case scenario, if many, many people aren’t able to pay back their $2.50 in loans, banks will not have enough money left to return to its depositors — since they’ve lent out more money than they actually possess.

So that’s why bank loans are dispensed carefully and vigilantly. We depend on government financial oversight to set strict rules on the banking system.

In practice, that is why you have to prove you have solid income before you can get a loan or credit card — it’s some guarantee that you are able to repay your debt. This is also why credit scores matter.

At this point, you might be thinking that J is a bit too cynical, pessimistic, or even just plain nuts.

After all, what are the chances of a major loan repayment crisis happening?

When the banks fell

Mind you, Lehman Brothers was one of the biggest players in the financial market then, as America’s fourth-largest investment bank.

But Lehman Brothers gambled its customers’ money by giving out loans to high-risk borrowers and exploiting a loophole in regulatory oversight to mask its negligent practices… till shit hit the fan.

And it was not the only bank to have done so, It was just the first in a domino of US investment banks to fall, setting off the 2008 global financial crisis.

The crisis rippled outwards from the USA impacting lives around the world. In Singapore, some local investors had their fortunes wiped out, as they were exposed to Lehman Brothers products. On a macro-scale, the Singapore government had to inject over 20 billion dollars into the local economy to fight off a financial crisis.

And this was the exact moment in time when J was working in Lehman Brothers — when the fecal fan was spinning at full-speed.

And so, one might start to understand why J thinks as he does.

Hearing J talk about his experiences was nothing short of experiencing true dissonance. While it might be easy to dismiss him as a tin-foil hat-wearing conspiracy theorist, J speaks eloquently and is obviously intelligent.

Coupled with the fact that he had actually worked in banks for 11 years, he’s arguably a primary source of information on the banking industry, having witnessed the inner-workings of an unethical bank.

In fact, listening to him made me start to worry a little bit about my $600 in the bank.

But in gold, there is some certainty. J believes it’s more real than the digital currency you have on your iBanking app. After all, “how can you prove those digits really represent something real?”

J regularly purchases gold (physically!) from UOB and stores them in his home, confident that it’s going to protect his money better than what, he believes, is a flawed banking system.

He stresses he doesn’t trust in certificates that banks issue that guarantee a gold bar. Each time J comes out from a bank, he waltzes out with an actual physical brick of gold.

“If a hundred people came to the bank to buy gold and the bank issues a hundred certificates, supposedly to guarantee you ownership, how do you know the bank doesn’t only have one gold bar in their safe? There is just no way to actually know for certain,” J says.

J currently owns gold that weighs at a total of 4.5kg (or over SGD$200,000), sitting pretty at home. He’s confident that if a disaster happens, such as a war, he won’t have to scramble to the bank to save his wealth.

“I am prepared for a black swan event.” In a worst-case scenario, he believes he could load up his suitcase with gold bars and move to safety with his wealth still intact.

A wealth of insurance

Gold is always valuable. In China, elders pass down gold jewellery and possessions to their heirs. The same is done in India.

There’s never a day that gold loses all its inherent value. It’s beautiful, it shines, and unlike many metals, it does not rust, so it’ll last a lifetime. It’s also rare enough to have value purely driven by its relative scarcity.

And according to J, its value has been rapidly increasing.

Where he once bought 100g of gold for $5,300 SGD, it’s now reaching the price of $5,800 for the same amount. Take a look at the valuation of gold and silver here provided by UOB, a source of gold that J frequently purchases from.

But what J does isn’t particularly new (albeit taken to some extreme). People have always been buying gold and using it as a hedge against a bad market.

It is not uncommon for investment advisors to suggest keeping a percentage of gold in an investment portfolio alongside shares, bonds, and cash.

So for some, gold is attractive because it is an investment vehicle that exists outside the financial system. As such, it insures you against the crumbling of financial institutions and markets around the world.

However, one of the drawbacks of holding physical gold is storage and security. It’s the key reason why we decided not to reveal J’s actual name — so he wouldn’t be targeted for a robbery attempt.

Walking away from the conversation with J, it is difficult to conveniently label him. Is he a conspiracy theorist? A hard-nosed realist? A cynical pessimist? Perhaps he’s just downright crazy.

Or maybe he’s just ahead of the curve. Who knows for sure?

But in his passion for gold, we’ve at least learned the potential merits of gold within an investment portfolio.

Some prefer to store away their money in the bank the good old fashioned way. Others put a fraction of their assets into the glittery stuff for a balanced investment portfolio. The Confusing Case of Home Loans She Lives in a BTO Flat… With Her Ex-Husband 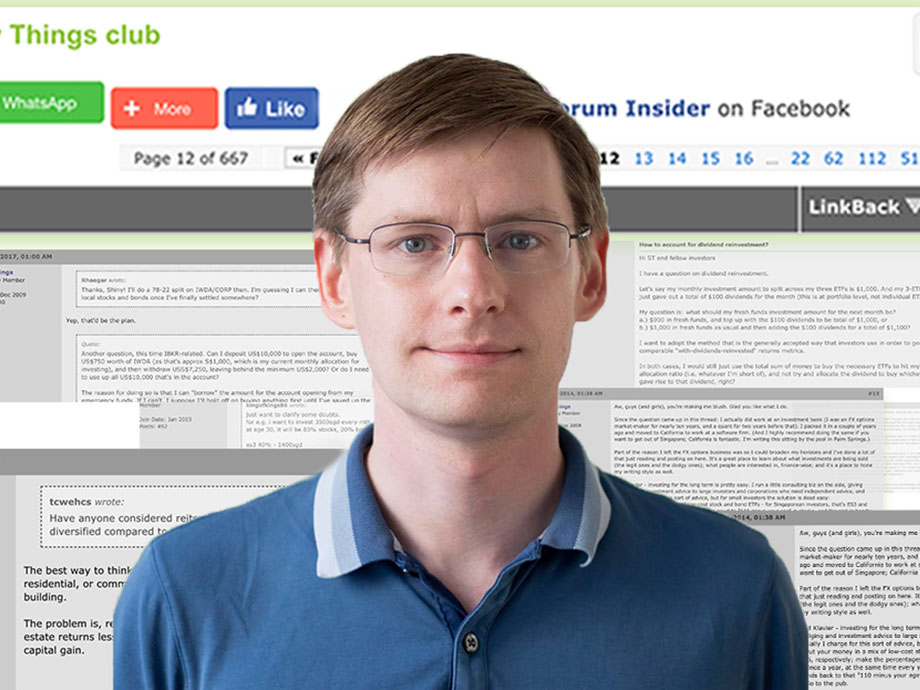